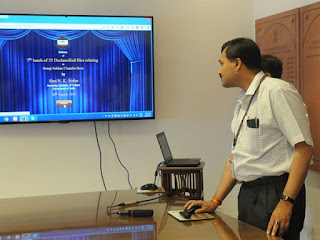 It may be recalled that first lot of 100 files relating to Netaji, after their preliminary conservation treatment and digitization, were put in the public domain by the Prime Minister of India, Narendra Modi on 23 January 2016, on the occasion of the 119th birth anniversary of Netaji.  The second lot of 50 files, third lot of 25 files, 4th lot of 25 files, 5th lot of 25 files and 6th lot of 25 files were released subsequently on 29 March, 2016, 29 April, 2016, 27 May, 2016, 29 June and 29th July 2016 respectively.  In all, 250 files have been put in public domain till now.
The present release of 25 files will further meet the continued public demand to access these files and this will also facilitate scholars to carry out further research on the doyen of the freedom movement.  The specially constituted Committee having experts from the field of archives, will look into the aspects such as ascertaining the physical conditions of the files and carry out necessary repair and conservation wherever needed, through conservation Unit. It will also verify the quality of digitization for enabling the digitized records to upload in the web portal ‘www.netajipapers.gov.in’. It will check if there is any duplication in the files are being released on the internet for use by the researchers and general public.
It may be reiterated that in 1997 the National Archives of India had received 990 declassified files pertaining to the Indian National Army (Azad Hind Fauj) from the Ministry of Defence. Further, in 2012, 271 files/ items pertaining the Khosla Commission, and 759 files/ items of Justice Mukherjee Commission of Inquiry, in total 1030 files/ items were received from the Ministry of Home Affairs. All these files/ items are already open to the public under the Public Records Rules, 1997.
Courtesy: NewsBharati

Married to a Hindu woman – Pentecostal Church Blocks cremation of...