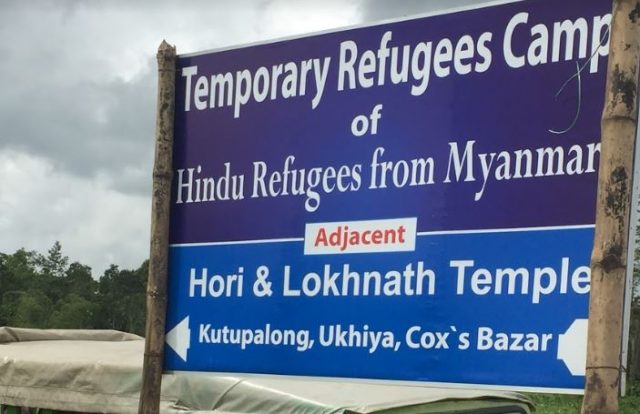 Like a miracle, a journey to watch Bangladesh Durga Puja celebrations happened.

Crossed border from Petropol, three hours from Kolkata, reached Shatkheera after another two hour journey – and by the time we reached Jessore, it was almost midnight. In these fifteen hours of journey we could see ten Durga Puja mandaps- Hindu families with children and women folk were there in large numbers. There, my friend, Gobind Promanik, President of Bangladesh Hindu Mahajot insisted I shouldn’t leave without visiting the Rohingya Hindus’ refugee camp near Cox’s Bazar. And next morning we were at Cox’s Bazar airport- a vibrant sea shore town, named after a British East India Co officer Captain Hiram Cox, replacing its old name Palongkee” ( yellow flower).

Ukhiya is the refugee camp site for Rohingya Hindus, 50 kms from Cox’s Bazar and it took us two and a half hours to reach as the roads are in bad shape.

After two army check posts, we reached the diversion point where a blue board announced the direction to the camp- ‘Temporary Refugees camp of Hindu refugees from Myanmar’.

A small village camp- sheltering 523 Hindu refugees bore a pathetic sight. About a hundred refugees have to love in a small hall type hutment. The women and children together with male members huddle up to spend sleepless nights. Seven days back two male Hindus were abducted by ‘Jangis,’ Muslim terrorists from this camp. One was found dead next day, the whereabouts of the second are still not known.

We met three young Hindu children, 8 to 12 years of age. All with shaven heads. “Jangis’ had killed their parents before their eyes in Myanmar. They were on shraddha- Hindu rites to perform post death puja for peace of the departed souls.

Shanti Debi ( name changed) came to us with folded hands as she got to know that some Hindus have come to see them from India. She said- take us away from here- Jangis are not letting us live in peace even when we have ran away from our home. “Did you face difficulties from Myanmar army, and their govt?” we asked. She and her husband Narayon said- “No, they were good to us. They were only angry with Jangis. We have no problem with Myanmar army, we want to go soonest- but dada, (elder brother) please help us to be resettled away from these Muslims. They dug up graves of our men before our eyes and buried them in our village (Myanmar border area),” she said sobbing and feeling difficult to narrate the incident.

What they said, on camera, was too horrifying. Even in the refugee camp a large number of Hindu Rohingya women do not display the traditional mark of Sindoor-vermillion on their forehead- fearing easy identification by Muslims. They abduct them, rape and convert. May incidents have gone unreported. “They say- convert, support us, otherwise we shall kill you. They want our children to fight Myanmar army with them and demand separate desh. We want to live peacefully and in our village. But seeing a Hindu they shout at us and comment on our women in a vulgar way. Where do we go from here?”

They complained that the relief material that india is sending to Bangladesh for Rohingyas is being diverted to the Muslims first and they get only the residual stuff. Some Sikh international NGOs and Muslim organizations are distributing food and also providing them meals. It is strange that Muslim refugees too are clubbed with Hindu refugees in Uikhiya increasing the chances of abduction and conversions of Hindus. Reports of Hindu women forced to wear burka, offer namaz and marry Muslims have already appeared in Bangladesh media.

In an atmosphere where everyone is trying to prove secular credentials by showing sympathies with Rohingya Muslims, the pains and sorrows of Hindu Rohingyas have gone unnoticed. Being Hindu has become another name for being tortured and insulted. Rohingya Hindus are made to pay the price of being loyal to Myanmar’s territorial integrity and living peacefully. They are just in our neighbourhood, but Hindus celebrated Durga Puja and Ram Lila oblivious of the fact that there are Hindus still living in fear of losing their religion and life. Durga stands for protecting devotees from terror but this year for Rohingya Hindus, Durga Puja day went off in dark hopelessness.

We were speechless before them, couldn’t even assure that india will certainly send some help, as we are secular and cannot differentiate between those who are victims and those who are the assaulters.